In terms of world affairs, 2003 was probably one of the most turbulent years. So did that play out in the music? It depends on how you want to think about it.

As long as there are new perspectives to be unearthed, the business of NewMusicBox will never be finished. Keep the conversation going by making a gift to celebrate NewMusicBox @15.

In terms of world affairs, 2003 was probably one of the most turbulent years. So did that play out in the music?  It depends on how you want to think about it. Music is inscrutable in its abstraction, especially when it does not have words to go along with it. Program notes can be helpful in this regard, though many composers believe that reading them interferes with the listening experience. Then there are the titles, which—unless you’re calling your piece something like Sonata No. 4 or, even more to the point, Untitled—betray some kind of narrative inclination.

In a conversation we had for NewMusicBox almost exactly eleven years ago, David Del Tredici admitted to me that the original title for his first composition for symphonic winds, which he had only just completed, was Christians and Infidels, but he was advised to tone it down and so he changed it to In Wartime. Both titles, though, mirror the events of that year—the Iraq War which began that March, the suicide bombings on three continents, etc.  But does his music? Well, he acknowledged that embedded in it are quotes from the national anthem of Persia and a motif from Tristan und Isolde, if that helps any. Carla Bley’s surreal reimagining of our national anthem (actually created and recorded in late 2002 but it appears on her 2003 CD Looking for America) also seemed to sum up the mood of that time, so much so that I trekked up to her home in Willow, New York, right after the album was released to talk about it with her. But again, music is wonderfully elusive; despite its seriousness and occasional portentousness, Bley’s big band arrangement is ultimately lots of fun.

I wish I would have asked Alvin Singleton about his 2003 piano and percussion composition Greed Machine when I finally spoke with him in depth about his music five years later, but to my ears, even without the suggestive title, it too seems an apt, if subtle, sonic metaphor for the dangerous uncertainty of those times and their probable cause. There’s nothing subtle about Neil Rolnick’s 2003 The Real Thief of Baghdad, but of course since live electronics combine with spoken narration in that piece, the words are what ultimately tell the story. 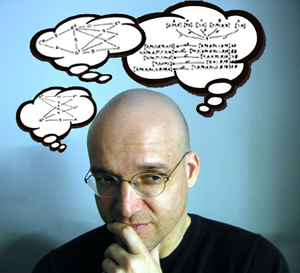 Sadly, Robert Hilferty (1959-2009), who never completed his incredible documentary film about Milton Babbitt, only ever wrote one article for NewMusicBox, but it was a doozy!

But I’m at a loss finding a zeitgeist-related thread in many of my other favorite purely instrumental compositions from that year, such as John Adams’s microtonal electric violin concerto The Dharma at Big Sur, David Dzubay’s early music-infused St. Vitus’ Dance for brass quintet, Jennifer Higdon’s lush Piano Trio, Paul Konye’s wonderfully idiomatic African Miniature Songs Without Words for solo piano,  or Steve Mackey’s psychedelic Dreamhouse. Though a work like Elliott Carter’s Piano Concerto, completed in 1965, betrays no program in its title, much has been written on how the work—composed as the Berlin Wall was being erected—epitomizes the struggles between individuals and societies; the work even incorporates a small concertante group in addition to the soloist and requires an unusual seating arrangement. Might his second work for piano and orchestra, Dialogues, which he completed in July 2003 (five months before his 95th birthday), also be emblematic of the world’s crises at that point? It doesn’t seem nearly as tempestuous as that earlier work, so perhaps not.
These Are the Vistas, the second studio album by the let’s-take-it-beyond-jazz trio The Bad Plus, is all instrumental, but in addition to compositions by each of the group’s members—pianist Ethan Iverson, bassist Reid Anderson, and drummer David King—they also play extremely inventive interpretations of two iconic pop songs from previous decades: Blondie’s 1978 “Heart of Glass” and Nirvana’s 1991 “Smells Like Teen Spirit.” Could this somehow be a message about how our own memories in the present irrevocably alter the past? Memories certainly seemed more malleable that year, perhaps from the déjà vu of a second American military engagement in the Persian Gulf. The elusiveness of memory is actually the theme of Robert Ashley’s Celestial Excursions, in which a group of elderly people struggle to recall their past as well as old sayings and songs they heard on the radio in their youth. It is also central to the plot of another favorite opera of mine from that year, Austrian composer Olga Neuwirth’s adaptation of American filmmaker David Lynch’s Lost Highway, which is every bit as creepy as the movie in its depiction of a sudden inexplicable corporeal transformation. Are there hidden messages in the mumblings that pass for song lyrics on Animal Collective’s eerie Campfire Songs, which was released that March? It’s hard to tell. There certainly was nothing “subliminable” (to use a phrase coined by our then-president) about the cover of an album issued the previous month, King Crimson’s final (at least up to now) studio recording The Power to Believe (which featured music collaboratively created by a quartet of musicians who, with the exception of the originally British group’s founder Robert Fripp, were all Americans).
My own strongest memory of 2003 was how awful the news reports were almost on a daily basis, but it was certainly much easier to ignore what was going on around you by plugging headphones into an iPod, which had hit the market two years earlier but was now easier to load up than ever before thanks to iTunes. (The iTunes store opened to U.S. residents on April 28, 2003.) For better or worse, this platform established what has now become the industry standard for legal downloading. Many musicians would bemoan that it also reduced all music to “songs” that were all equally worth only 99 cents, while 61% of people surveyed by Billboard in August of that year claimed that 99 cents was too expensive. I remember refusing to be part of this cultural phenomenon (I remain an apostate), preferring to hear my music via physical formats like CDs and—gasp—LPs. In 2003, a lot of people thought I was hopelessly anachronistic, never imagining the resurgence of vinyl in the past year.
But most of the folks I admire steadfastly keep to their own clocks, though probably few as demonstrably as La Monte Young and Marian Zazeela, who for years maintained a 28-hour day. We finally had an opportunity to talk with them for NewMusicBox. (He had recently completed the composition Just Charles and Cello.) Paralleling the duration of his seminal The Well-Tuned Piano, our conversation lasted more than five-and-a-half hours and we published all of it. 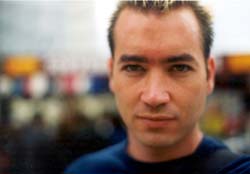 A final personal note here… I’d be remiss in these remembrances if I didn’t give a shout-out here to composer Randy Nordschow to whom I will forever be grateful for videotaping that marathon chat. It lasted until 3:15 a.m. on an extremely hot August evening (the night before the massive northeast blackout!) and for optimal sound, we had to turn off the air conditioning. Randy was a vital member of NewMusicBox’s editorial team for more than five years starting in January 2003 when Molly Sheridan journeyed off to Nepal and Amanda MacBlane (a.k.a. Mandy) took over her duties—resulting in the rest of the NMBx team morphing from the alliterative Molly and Mandy to the rhyming Mandy and Randy. Later that year, Mandy moved to France but luckily Molly came back, this time for good. At the time, though we kept going without a hitch, it was a somewhat unsettling game of musical chairs—at least to me. Now it’s a delightful memory, a positive analog to those constantly shifting and often unsettling times.