12 Things I’ve Learned from Church Music, Parts 10-12: Stick to Texts Even Though It’s All About the Music…Actually, It Isn’t

“Do you remember…?” is how the song starts. AlleeWillis was writing a song with Maurice White of Earth, Wind & Fire and thought that the nonsense phrase “Ba de ya” was Maurice’s place holder. She kept thinking they were going to change it, but they never did, so “Ba de ya, say do you remember / Ba de ya, dancing in September / Ba de ya, never was a cloudy day” stayed, and “September” became one of EWF’s biggest hits.

Songwriters can change lyrics, but composers generally don’t, unless we collaborate with a librettist or a poet on a new work. I’m guessing that, because of the two-edged sword of copyright, we mostly work with old texts by dead people. Our choice, then, is limited to what texts we decide to set.

In church music we have that choice, too, up to a point. We match, say, an anthem or hymn text to one of the many church themes, knowing that it will fit somewhere during the year. (We could use more Doubting Thomas anthems, by the way.) Even in liturgical music, there are numerous texts in a variety of traditions. But they’re written, if not in stone, at least in a tradition, so once we choose a part of the liturgy to compose music for, we have to stick to it.

What a good education this has been for me. The “21st night of September” follows “Do you remember” in Earth, Wind & Fire’s song only because they already had “remember,” which rhymed with “September,” and “the 21st” fit better than all the other dates of the month. (Willis said they tried them all.) The intro was already finished, and the “greatest lesson” in songwriting, she says, kicked in: “Never let the lyric get in the way of the groove.” 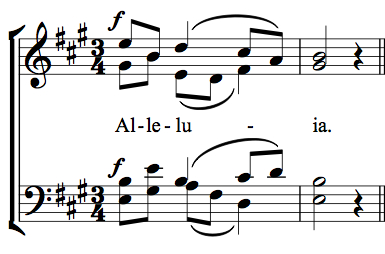 But composing to a locked-in text upends that. Take the example I mentioned in the first essay, the Easter Alleluia. “Alleluia. Christ being raised from the dead will die no more; death has no more dominion over him. Alleluia. Jesus said, I am the way and the truth and the life. Alleluia.” Three Alleluias sandwiched around the words of Paul in Romans and the words of Jesus from the Gospel of John. Those were the words for the Fifth Sunday of Easter in the liturgy we were using. If I were to write an Alleluia verse for that Sunday, those were the only words I could use.

That’s the deal. My job, reversing the songwriter’s, is never to let the music get in the way of the text. If I don’t like the words, I can find a church whose words I do like, or I can find another line of work.

But assuming I go ahead and set it, whence the music? Well, I dig it out of the words. I don’t shoehorn them into whatever musical idea I happen to have at the moment. I don’t start with a groove, but with words, and dig, and dig, and dig some more, until I lift up the words with the music I unearth. With all that digging, I’d better enjoy it. More than that, I have to fall in love with it, just like with any text I set. I fall in love with the text, or I don’t bother setting it.

Still, I’m a writer of music, and the text, in this case, is the way to get there. Words are not to be worshiped. Composers pretty much manhandle them, in fact, elongating syllables and pulling words out of their natural state. Even in a short piece like an Alleluia verse I may repeat a word or a phrase, as long as I don’t muck about too much. (The people have just stood up and are waiting for this to end so that the Gospel reading may commence.) 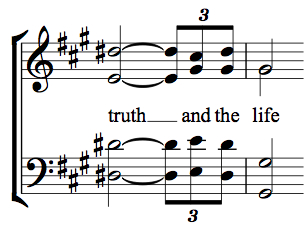 Music in church has been a great reminder to me, therefore, that my writing needs to be efficient and strong. It needs to get to the point, and the point had better be a good one. I’ve never liked oohs and ahs in music, and now I think I know why. They’re weak. Sometimes you want a sonic cushion, but I’d much rather get it from the text itself than from a mercenary ooh hired from outside. “Alleluia” has lots of vowels, and therefore lots of built-in cushions should I want to use them that way. Those triple leading tone D-sharps against the E fall on the word “truth,” as ooh a moment as you could have.

Once I see the text this way, as a carrier of musical information, I can get beyond the words and to the music itself. There are a myriad of ways texts suggests this, of course, with rhythm and accent and consonants and so on. All of these factors change, depending on my reading, and so a vast musical landscape opens up as I fall deeper and deeper in love with the text. I move things about, finding even deeper meanings as I move through the text and discover that I am no longer reading but composing.

And composing is what it’s all about, right? Ooh, no, actually. Church music is about church. I have to get on with it, I have to hit my marks, and then move on—like an actor, and it’s much like theater in that sense. Things more important than music are going on. They didn’t invent church to provide me with composing opportunities.

So what about composers who have nothing to do with church? What about me, when I’m not writing for church?
Well, just as they didn’t invent church for composing, neither did they invent choirs or organs or string quartets or orchestras for composing. But without composing, we say, there’d be no music and no orchestras. Of course, but people don’t get together and play—and people don’t get together and listen to other people play—because they love composing. They love something else, something inside, around, below, and above themselves. They love…that’s it; they want to love. Even if they don’t know it, they want to love.

Listen to a cello and an oboe as they serve each other, as they match a quintuplet in a duet, as they listen, lead, and follow at the same time. They cannot do that without love. The listeners in pews or concert halls lift their faces to the music; their minds race ahead and follow behind at the same time. A leading tone desperately wants to resolve up—but, maybe, not this time; maybe this time there’s a deeper resolve.

All these we think of as musical choices, but ultimately they are not. They are choices to serve, choices to love. I keep having to remind myself of this. For me, in these twelve lessons and in many more things I’ve tried to learn about composing, I’ve learned them most neatly in church music. When it’s late and when I’m tired and when for hours I’ve been composing, I have to remember that it’s not about composing. I have to ask myself, Do you love? Do you serve? Do you remember?