For the last article in my series on women in jazz this month, I would like to reflect on a 20th annual series of concerts that we just completed with an eight-piece all female group in celebration of Women’s History Month and to conclude with action steps towards an inclusive future.

Spring is here – finally – as earth prepares to put on a colorful new coat, we experience the energy of new life.  Some of us get an urge to do spring cleaning—getting rid of the dirt and dust of winter and unwanted clutter—and clear the path ahead.  As Women’s History Month winds down, this will be the perfect opportunity to sweep out the clutter from the past and move forward into a future that brings together the music of black, white, brown, male, and female individuals all over the world.
In my earlier articles this month, I traced the history of Women in Jazz (including my own) and looked at research results that document psychological and social differences between the genders, as well as barriers to entry for women.  In this last article I would like to reflect on a series of concerts that I completed with an eight-piece all female group in celebration of Women’s History Month and to conclude with action steps towards an inclusive future. 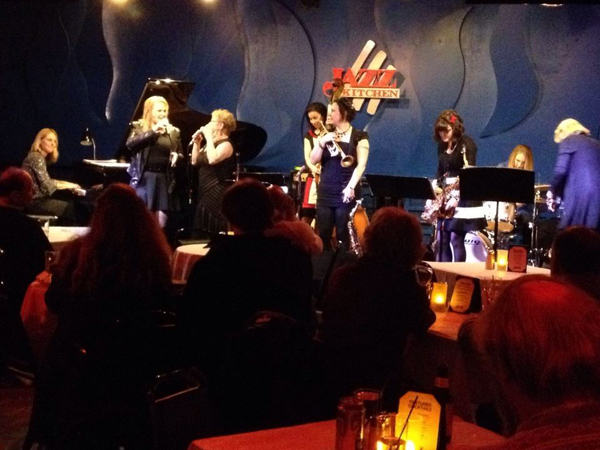 For 20 years now, I have hosted Women in Jazz features during March in the Indianapolis area.  Our first event was in March 1994 for the Jazz Fables Series in Bloomington, and it included vocalists Janiece Jaffe, Cherilee Wadsworth (now Dean of Arts at the Kansas City Community College), and Rachel Caswell, myself on piano, saxophonist Kristy Norter (who went on to play with DIVA), and a male rhythm section.  Some of the events over the years were on elaborate stages, such as the Indianapolis History Center and the Walker Theatre, some in clubs such as the Jazz Kitchen and Bloomington’s Bears Place, and everything in between.  We usually had great audience response and many fun shows. Reflecting over those 20 years, here are some of the changes I’ve witnessed as well as lessons learned.

1. Up until 2008, it was very difficult to find a rhythm section and we needed ‘ringers’.  Now I’m faced with tough choices between several excellent female drummers and bassists in the area.

2. Similarly, our groups usually featured a handful of vocalists and the repertoire was mainly vocal standards.  Now we have a repertoire of originals as well as music written by a wide variety of female composers from Berniece Petkere to Marian McPartland, Carla Bley, Joanne Brackeen, Joni Mitchell, Carole King, and many more.  Our front line is at least three horn players; this year we had trumpet, saxophone, and violin.

3. Due to the success of our events, other leaders and promoters organized similar tributes.  Unfortunately, they usually were led by several vocalists and backed by an all-male group, thus reinforcing the original stereotypes even further rather than creating new role models.

4. Some fellow musicians did not want to participate in our tribute series, since they wanted to be acknowledged for their musical skills rather than for their gender.  Of course, that’s the goal for all of us and a much respected choice.  But as discussed in the earlier articles, there are some barriers to be broken down and action is still needed; we’ll continue to blaze trails for all of us.
5. Every so often the pushback would also come from the male community, pointing out that nobody is organizing a tribute concert for them and that the series is reverse discrimination using our gender as a gimmick.  Well, looking at the percentage figures of male participation in jazz groups and employment figures (more than 90% each), there are plenty of opportunities and tributes available for them year-round.  And according to the feedback from my fellow musicians from this year’s series, many of these opportunities are still closed to them.  Wouldn’t that be similar to making Dad breakfast in bed for Mother’s Day?

This year’s featured artists spanned three generations of jazz women with great careers in progress and ready to take off.
Natalie Boeyink (bass) has backed up luminaries such as Jovino Santos Neto, Joe Piscopo, David ‘Fathead’ Newman, Jon Hendricks, David Liebman and Lorraine Feather.  She is currently completing a Doctorate in Music Education at Indiana University and serves as the director of the Attica String Project.

Anna Butterss (bass) hails from Adelaide, Australia and is taking the U.S.A. by storm.  L.A., watch out when she moves there in two months after finishing her Master’s Degree in Jazz Studies at Indiana University.

Carolyn Dutton (violin) is originally from Indiana and returned recently after a successful  30-year career in the New York music scene, performing everything from Broadway to jazz to punk, and touring the world.

Arianna Fanning (drums) recently relocated to Nashville, TN after completing a degree in jazz studies at Indiana University.  She was a finalist in the inaugural Hit Like a Girl Drum Contest and has backed up the likes of Randy Brecker, Jeff Coffin, Sean Jones, Shawn Purcell, Michael Weiss, and Chuck Redd.

Amanda Gardier with her saxophone

Heather Ramsey Clark (vocals) is versatile in many styles and leads the Midwest School of Voice. She has wowed audiences in Italy and Germany and is my collaborator for the Girls Create Music summer songwriting camps for girls ages 9-16.

Janiece Jaffe (vocals) is a master of improvisation and vocalese.  She has produced multiple albums and has toured internationally.  In addition she leads healing and meditation workshops with her voice and crystal bowls.

Jordan West (drums),  a senior at Ball State University, is not only sought-after as a drummer, but is also known for her unique vocal styles with her group Trackless.

Lexie Signor (trumpet) hails from Michigan and is currently pursuing a Doctorate in Trumpet Performance at Indiana University. She specializes in lead trumpet playing and wows audiences with her beautiful sound.
I asked all of the participants to reflect on our concerts and to provide feedback on their favorite aspects of the series, the importance of raising awareness of female participation in jazz, and support strategies that would have helped them in shaping their own careers.  They all agreed that one of their favorite aspects of performing together was the non-pressured environment of not having to prove anything to their band mates.  “We compliment and complement each other” (Carolyn).  They also felt inspired by their peers’ high level of musicality. “I would love to see a group like this go around to schools and play at jazz festivals; wouldn’t that make a statement!” (Natalie).

The issue of raising awareness for female participation in jazz was also crucial for them.  Everyone admitted how difficult it was to push the boundaries without any role models.  Similar efforts might prevent the large dropout rate of instrumentalists in middle and high schools.  Furthermore, leadership and creative roles of women in the general workforce are still limited and leadership in jazz as an extremely creative art form can set powerful examples.  “Promoting female improvisers and band leaders in jazz highlights the fact that women are equally as bold, creative, powerful, and intellectual as men” (Amanda).
As we’re still working on establishing equal rights in the workplace and at home, having mothers on the bandstand is important inspiration for the younger generations.  “Just sharing the stage with such strong and musically expressive moms last night has really helped me debunk this lie for myself and renewed my faith that yes, we can have our cake and eat it too!” (Lexie).  Janiece raised an important additional point: “Equality does not mean ‘sameness’ though.”  Including more female voices into the improvisational process will add variety and distinct perspectives, making the music richer and appealing to wider audiences.  And finally, more support in career development strategies and mentoring outside of school is needed.  “Moving to a new town and trying (as a female) to get people to let me sit in was really discouraging” (Natalie). 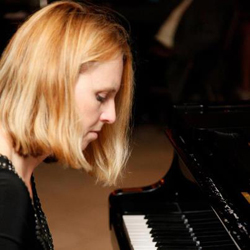 Overall, while we have made big strides forward, we still don’t have a woman in the White House (as Carolyn pointed out).  The good news is that we might only be a few years away from achieving this goal.  Until then, taking action will be the only way to facilitate change, and anyone can contribute.  Such action can be on a larger scale by organizing concerts, lobbying for equal rights and pay scales, or employing women whenever possible. But what about one small step that any of us could do right now, such as encouraging a 10-year old girl to take up drum lessons, or taking some youngsters to a jazz concert, or just taking a risk without being afraid of public image.  So my charge to all readers at the end of this series and at the end of this year’s Women’s History Month is to commit to one action item in support of female involvement in creating music for the rest of the year – and do write it down, as it might get lost in the daily shuffle.  And please don’t ask me if I’m the singer with the band when you see me perform next time.