New York, NY – New Music USA’s Amplifying Voices program, which launched in 2020 to foster collaboration and collective action between U.S. orchestras and composers through a network of co-commissions, has expanded rapidly to soon include over forty-five orchestras across the U.S. and beyond. Today, New Music USA announces two additional composers to the existing nine-composer roster for co-commissions, Katherine Balch and Clarice Assad. Balch and Assad’s commissions are being created by new funding from the Virginia B. Toulmin Foundation.

Katherine Balch will write a new piece co-commissioned by lead orchestras the New York Philharmonic and Pittsburgh Symphony Orchestra. Described as “some kind of musical Thomas Edison – you can just hear her tinkering around in her workshop, putting together new sounds and textural ideas” (San Francisco Chronicle), Balch is a composer interested in found sounds, playfulness, intimate spaces, and natural processes. A recipient of the 2020-21 Rome Prize, Balch’s music has been presented by leading ensembles and festivals including the Los Angeles Philharmonic, the Tokyo Symphony, IRCAM ManiFeste, and Tanglewood. Her music is published exclusively worldwide by Schott Music.

Clarice Assad’s new work will be premiered by lead commissioner The Saint Paul Chamber Orchestra, with additional premieres by American Composers Orchestra (New York), the Chicago Sinfonietta, and ROCO (Houston) to take place in future seasons. A powerful communicator renowned for her musical scope and versatility, Brazilian American Clarice Assad is a significant artistic voice in the classical, world music, pop and jazz genres. A Grammy-nominated composer, celebrated pianist, inventive vocalist, and educator, she is renowned for her evocative colors, rich textures, and diverse stylistic range. As an innovator, her award-winning education program, Voxploration, has been presented throughout the United States, Brazil, Europe and Qatar.

Amplifying Voices aims to make major strides in diversifying orchestral repertoire. According to the Institute for Composer Diversity’s 2022 Orchestra Repertoire Report, programmed works by women composers and composers of color increased overall from 4.5% in 2015 to 22.5% in 2022. Amplifying Voices is a long-term program which contributes to this momentum, increasing the support and promotion of composers who have been historically marginalized, creating space for their contributions to artistic-planning at major national orchestras, and making major strides toward transforming the classical canon for future generations. In addition to facilitating co-commissions, Amplifying Voices also asks orchestras for a commitment to sharing existing repertoire by BIPOC and women composers.

“At New Music USA we believe that the programming of more pieces by living composers from a multitude of backgrounds will transform orchestral music for current and future generations,” says Vanessa Reed, New Music USA’s President and CEO. “It’s encouraging to see the pace at which orchestras are expanding their repertoire. To sustain this momentum, long-term commitments and collaborations are key. That’s why we’re honored to receive new and continued funds through which we’re building on the work facilitated by our founding partners in 2020 to create long-lasting change for composers, orchestras and their audiences.”

“I am honored to participate in such an exciting project with these fantastic orchestras that I genuinely admire—each with a unique vision for the future of today’s music,” says Clarice Assad on being a part of Amplifying Voices. “I get to write and share the stage with them, so in a way, it is like a dream coming true for me.”

“It was an enormous thrill to hear about the chance to participate in New Music USA’s Amplifying Voices program, adds Katherine Balch. “Already it has incubated new works by some of my favorite composers today. This project frees me to write the music of my dreams with the assurance that it will be in the caring and passionate hands of a consortia of orchestras committed to sharing historically marginalized music with audiences at the highest level of artistry.”

During the 2022-23 concert season, Amplifying Voices will have fostered eleven thirteen orchestral premieres taking place in London and across the U.S., including new works by Tania León, Shelley Washington, Brian Raphael Nabors, Vijay Iyer, Juan Pablo Contreras, Tyshawn Sorey, and Nina Shekhar. Works by Jessie Montgomery and Valerie Coleman will be premiered during the 2023-24 concert season.

Each of the composer’s pieces will be performed by a minimum of four orchestras over the course of three years.

Vijay Iyer’s piece Human Archipelago will be premiered by cellist Inbal Segev and the London Philharmonic Orchestra on October 1, with subsequent performances by the Oregon Symphony on January 14-16, 2023 and the Illinois Philharmonic Orchestra on February 23. A concerto for cello and orchestra, Iyer’s new piece borrows its title from a book project by author Teju Cole and photographer Fazal Sheikh, about the entanglement of climate change and forced migration.

Shelley Washington’s work Both was premiered in July 2022 by the Aspen Music Festival and School, and will have its West Coast premiere on October 15 and 16 with the Los Angeles Chamber Orchestra. Both is inspired by the many dualities within Washington’s personal and professional life with respect to her racial, geographical, and musical influences.

Brian Raphael Nabors’s piece Upon Daybreak is inspired by Dr. Maya Angelou’s poem “A Brave, Startling Truth,” and will be premiered by the Berkeley Symphony on October 16 with a special pre-concert talk moderated by New Music USA’s Vanessa Reed, as well as ROCO in Houston, on February 18, 2023, and Detroit Symphony Orchestra on April 27-29, 2023. Nabors says, “I am overjoyed to be a part of the Amplifying Voices program for so many reasons. This program is groundbreaking through its promise of a continued influx of impactful music from a multitude of perspectives. My colleagues and I are so very fortunate to be a part of a movement that will bring us closer to Maya Angelou’s vision of a future of peace and acceptance for all people.

Juan Pablo Contreras’s piece MeChicano was premiered by the Las Vegas Philharmonic in May, and will be performed by the Richmond Symphony on February 25 and 26, 2023. He says of the piece, “MeChicano (a combination of Mexican and Chicano) – is the first piece that I composed as a Mexican-American composer, having finally become a U.S. citizen after living here for the past 15 years.”

Nina Shekhar’s piece for youth ensemble, which will be premiered by Youth Orchestra Los Angeles in spring 2023, draws on a popular word game to allow students to create their own musical narratives.  She explains, “the piece consists of short stories and musical settings that contain ‘blanks;’ the students then fill in the story blanks with words of their choosing, then come up with sounds that represent those chosen words. The musical arrangements include corresponding ‘blank’ noteheads, in which the students can fill them in by playing a designated sound that they chose.  This framework serves as an identity metaphor in which kids can insert themselves into these stories and choose to center any kind of character, and it guides students through the creative process to learn how to compose a piece themselves.”

To read more about each composer, their pieces, and see a complete list of orchestras participating, visit the Amplifying Voices program page. 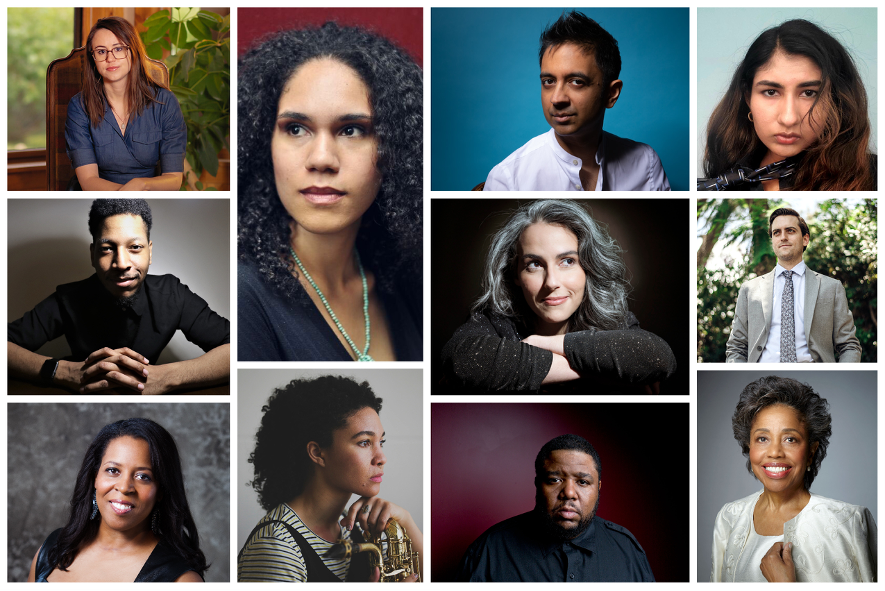 Alongside the co-commissioning program, participating orchestras, composers and industry guests are coming together through the Amplifying Voices Learning Lab. Anticipated focal points of these regular conversations include best approaches to co-commissioning, centering existent repertoire by BIPOC composers, and enabling audiences around the country to discover the most exciting music of our time. Amplifying Voices is powered by the Sphinx Venture Fund, with additional support from ASCAP, the Sorel Organization, the Virginia B. Toulmin Foundation, and Wise Music and The Wise Family Charitable Foundation.

“The Virginia B. Toulmin Foundation is proud to provide new funding that expands the crucial work of the Amplifying Voices program in supporting new orchestra works by women composers,” says Foundation Trustee Alexander C. Sanger. “The Foundation shares the program’s inspiring vision for a more equitable future in orchestral music, and we are pleased to continue building on the program’s success.”

“We are excited to support Amplifying Voices through the Sphinx Venture Fund, which powers programs that affect extreme and measurable change to transform the future of cultural diversity, equity, and inclusion in the arts,” says President & Artistic Director of Sphinx, Afa S. Dworkin. “The increasing roster of composers and the number of performances taking place across the country and now internationally demonstrates that there is not only a vast and diverse talent pool to draw upon, but a willingness and eagerness to program these works, which we applaud. We want to encourage artists and organizations to consider leading the change through innovation as New Music USA is doing, and applying to the Sphinx Venture Fund.”

“Amplifying Voices is such an exciting project, and The Sorel Organization is thrilled to help support it,” adds Wende Persons, Managing Director of The Sorel Organization. “New Music USA is truly making a difference in expanding orchestral programming, adding more and more voices and stories to our country’s music making.”

The Amplifying Voices program continues New Music USA’s legacy of connecting living composers and orchestras in the U.S. to create new works. From 2011-2019, New Music USA ran the Music Alive Composer in Residence program with support from the Mellon Foundation. This built on the work of one of New Music USA’s founding organizations, Meet The Composer (MTC), which launched its breakthrough Composer In Residence program in 1982. In its 20-year span, Music Alive, which was run in partnership with the League of American Orchestras, supported 116 composers, 79 orchestras, and 121 distinct residencies.   New Music USA was awarded the Gold Baton from The League of American Orchestras, its highest honor, in 2020 for its outstanding work in the sector.

New Music USA supports and amplifies the sounds of tomorrow by nurturing the creation, performance, and appreciation of new music for adventurous listeners in the United States and beyond.  We empower and connect US-based music makers, organizations, and audiences by providing funding, fostering new connections, deepening knowledge, and working as an advocate for the field. New Music USA works in collaboration with its community in response to pressing needs and to amplify the diverse voices of music creators. New Music USA envisions a thriving and equitable ecosystem for new music. Amplifying Voices is the next step in New Music USA’s 20 years of support for the orchestra sector in the US.  The program also continues New Music USA’s work to create racial and gender equity in the music industry, alongside programs such as Next Jazz Legacy and Reel Change: The Fund for Diversity in Film Scoring. www.newmusicusa.org