The advent of the moving picture brought about the development of an enormous amount of new music composed specifically to accompany film. There are hundreds of pieces in the Silent Film Sound and Music Archive to discover and use for accompaniment or analysis, all of it once an influential force on the development of the cinematic score.

Help Me Help You: What Orchestra Managements Need from the New Music Community

There are a great number of interlocking gears in motion behind every orchestral programming decision. Understanding this can help all of us in the new music community be constructive, rather than reactive, advocates for the repertoire we want to hear.

Looking at life through a musical lens, I see many correspondences that are perhaps easier to see in a city like New York, where the counterpoint of life is omnipresent.

Bun-Ching Lam: Home is Where You Park Your Suitcase

Born in Macau, educated in Hong Kong and California, and now dividing her time between Paris and Upstate New York, Bun-Ching Lam creates music that is shaped by her multicultural experience as well as her extreme curiosity. But she is skeptical of fashion.

Our friend and colleague Vanessa Ague agreed to curate a Halloween-themed playlist with works that she sourced from across the New Music USA platform. She found some great tracks!

The Irresistible Soundtrack to Terror

Montage: Great Film Composers and the Piano was a collaboration that was bound to happen one day given my years of living in Los Angeles and working with composers.

Paul Elwood confesses that he used to become jealous, mildly enraged, or depressed by the accomplishments of others until he realized how pointless it was to hold his own creative experiences up against those of others. “I’m composing every day, teaching, playing gigs, and staging concerts. Our successes are self-defined and they can’t be narrowly conceived….Forty years later, I’m still doing it. I consider that to be a successful career in spite of never winning (or being nominated for) a Pulitzer, never placing in the Walnut Valley National Banjo Competition, and never being named teacher of the year.”

The Secret Lives Of Composers Who Work In The Trades

The only way you fail at art is if you stop doing it. There’s no reason a composer can’t be a plumber or an electrician instead of a teacher. All you have to do is keep writing.

The idea for playing some joint recitals with Terry Riley was conceived in January 2017 when I met up with him at one of his solo concerts at Los Angeles’ Geffen Contemporary gallery. In an email shortly afterwards, he wrote, “It will be a challenge as you mostly play written music and I almost always improvise, but I am sure it will be great and hopefully fun for both of us.” 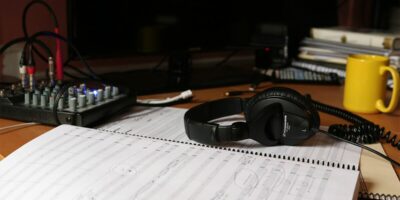 Show Up, Stay Awake, and Tell the Truth

My Search for Ben Weber

Ben Weber was an enigma. He was a twelve tone composer whose lushly harmonic music is often described as tonal. He was a deeply serious, intellectual artist in the metaphysical mold of Schoenberg and Busoni. At the same time, he was famous in artistic circles for his impromptu, hilarious yet oddly poignant drag performances of opera performed for close friends at his West Village apartment.

Only in Los Angeles?

It could be said that Los Angeles has conspired, by countless means and for many decades, to make itself into as hospitable an environment for new music as possible.

New Music USA staff member Deborah Steinglass has assumed the role of Interim CEO (effective October 1, 2018) while the organization’s board of directors is involved in a nationwide search to find a new permanent President and CEO.

The Autobiographical Impulse in Composition

No matter what an artist does, the choices are often subconscious, based on personal experience and background. This background dictates where we take our music.

It’s All People. And It’s All Connected

Writing all of this down has been an opportunity to sort through some of the chaos of the last ten years or so. I’ve never really sat down and written about myself. I don’t generally find myself that interesting. After all, I already know how the story goes. But maybe I don’t. However, one of the things that I know is that everything that matters in my life is something I owe to other people.

Surfing on a Constantly Shifting Bed of Earthquaking Sand Dunes

You don’t get to just change one part of your life at once. That’s not what life is. Life is where you surf on a constantly shifting bed of earthquaking sand dunes and you try to grab what happiness you can as it floats by amidst the chaos. At this point, I can hardly go anywhere without running into a friendly face—whether it’s someone I know from the Internet, or someone from a video game music conference.

The Magic That Happens in a Week

Vermont College of Fine Arts plays up the “low residency” aspect of its music composition MFA program. You study remotely with a grad advisor for six months, and then you reconvene on campus for a week-long combination of a conference and a festival. But the real value of the school isn’t in the semester format. It’s in the magic that happens in that one week.