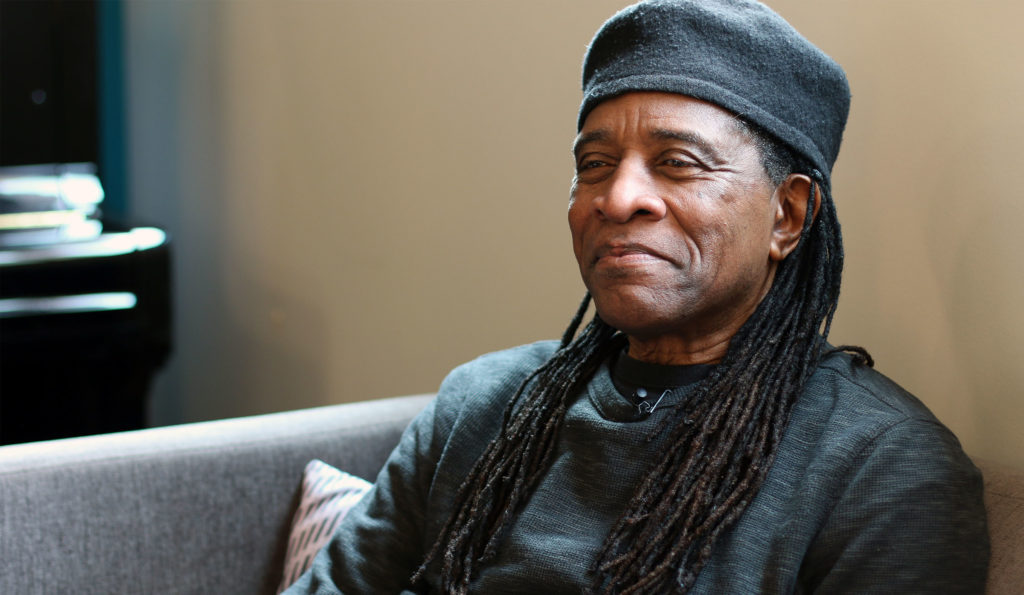 Hannibal Lokumbe has been defying categorization in his music for decades, but significant support from one of our parent organizations, Meet The Composer, allowed him to embark on his most ambitious musical synthesis to date, African Portraits, which combines blues and gospel singers, traditional African musicians, a jazz combo, and a symphony orchestra. In the years since the merger of MTC into New Music USA, we have continued to support Hannibal, most recently through a three-year residency with the Philadelphia Orchestra, which culminated in his powerful and deeply moving Healing Tones.

“My love for music is absolute to the degree that we are one in the same. The early seventies in New York City were brimming with musicians like myself who were busy probing new music concepts as well as new spaces in which to present them. The loft scene was a result of this fertile musical probing. The genius Ornette Coleman was monumental is its inception. It was a heroic and creative attempt to demand that the music labeled Jazz and its progenitors be viewed and respected for the miracle that it and they are.

Granting agencies, at that time, were abysmal in their lack of support for those who lived, struggled and died in the cause of extending the great music of Armstrong, Bird, and Holiday. Such practitioners were lucky if from the serving of the lucrative financial grant pie, they received a few crumbs. Of the tens of millions of dollars awarded to predominantly White cultural institutions that supported ancient European traditions, the creators of America’s only musical culture were left far out in the financial cold. Eventually, a true cultural hero by the name of John Duffy said, enough is enough.

The monster of American cultural inequity was dealt a mighty blow with his creation of Meet The Composer, the institutional birth mother of New Music USA. Meet The Composer, through The American Composers Orchestra, commissioned my opera, African Portraits. This commission in fact caused me to refuse a lucrative offer to permanently move to Europe as a composer. The African Portraits commission gradually shored up my faith in the possibility of cultural equity so painfully missing, and so obviously missing in the land of my birth. Those funds also allowed me to curtail my exhausting tour schedule, which then afforded me the much needed time to compose and to be present with my family. It helped as well to allow me to feel that I could escape a then recurring nightmare much too common among my colleagues; that being, to die young, brilliant and broke.

The three-year Music Alive residency program with the Philadelphia Orchestra allowed me to work on a deeper community level as never before.  It allowed me to enact ideas that had long been of great interest to me.  String quartets were performed in the prisons to the great appreciation of the inmates.  Before the string quartet performances, the inmates and I studied in depth histories of the instruments themselves.  This also afforded the opportunity to study the extraordinary lives of both Anne Frank and Fannie Lou Hamer, the two subjects of the string quartet pieces.  Having the orchestra perform at the Broad Street Ministries’ shelter was equally astonishing and a long-held dream that came true. The residency touched the lives of people who had never before set foot in Verizon Hall and it, as stated, by the musicians of the orchestra, allowed them to benefit from playing in places they would not have ordinarily performed.  I am very pleased to state that both I and the orchestra enjoyed and will continue to enjoy the fruit born of that three year residency.

New Music USA has greatly altered the previous woeful granting policies of this country. It clearly recognizes that America, as well as the world, can no longer afford to deny itself the cultural food it so desperately needs by the continued marginalization of artists of color. The efforts of New Music USA are bold, fearless and fair. The continued results of its policies are proof that the citizens of this land and of this world have the power to do what is needed to make us all worthy of the priceless gift that life is. I applaud this noble organization’s tenth anniversary of service to the Music Performing Arts community and look forward to its meaningful future impact on the lives and careers of American musicians.