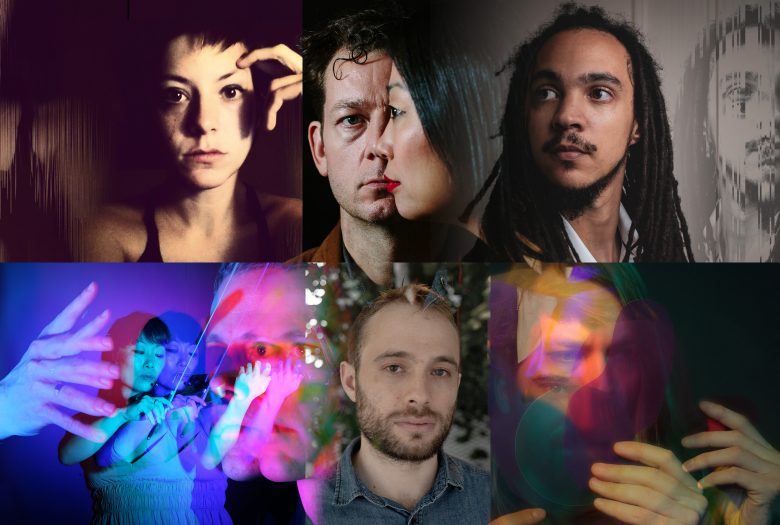 String Noise will start out the evening with a live performance of Way by Alex Mincek, the title track of their latest album on New Focus Recordings – out May 13, 2022! The idea for the piece focuses on making paths, or rather, finding different ways through various austere sonic environments (and/or the physical actions linked to the audible surfaces). Also on the album are (in) tone by Catherine Lamb and Field by Lou Bunk. This album lures you into a wonderland of sonic beauty and extremes. Pauline will then take the stage in joining forces with electronic artist from Pittsburgh Jesse Stiles in their debut as Congregation of Drones. Harris’ virtuosic visceral chops with Stiles’ singular approach to sampling, spatialization, and signal processing combine to create elaborate musical structures where time seems to fold in on itself as the performance unfolds. The music is both extreme and approachable, dashing between delicate fields of chattering chirps and pizzicato pulses into roaring tunnels of cascading harmonic energy.

Their double vinyl Twenty Twenty to be released in July 2022 on Every Possible Recording is a massive new body of music that merges daring and shockingly emotional strings with torrents of pulsating electronics, presenting the listener with immersive, surreal soundscapes created through live processing and experimental sound synthesis. Our friend, conductor/composer/violist Robert Ames, a super-connector from London, together with film composer and podcaster Ben Corrigan will perform a live set from their new collaboration: CARBS. Album just released in April 2022 on Modern Recordings, they had the opportunity to explore their voices as music makers, taking inspiration from their robust history of collaborations and passion for electronic and classical music to create sound that’s both cinematic and danceable, built on lush harmony, catchy patterns and driving rhythms that form an outer space trance. When writing the music on CARBS, Corrigan and Ames weren’t driven by an overarching narrative or theme. Instead, they were driven by spontaneity. As the tracks came together, though, they started to hear it as some kind of otherworldly fantasy. The eerie, wondrous quality of the music felt like roaming through outer space, and they started thinking about extraterrestrial travel and spaceships. There’s a starry-eyed feeling to the music, too, driven by it’s effervescent and sprawling atmospheres. The feeling of joy and unbridled exploration are perhaps the strongest undercurrents of the album, all pulled together by its dreamy, psychedelic album cover by Filipino-Australian visual artist Mark Constantine Inducil.

Finally, after a couple of years of forced dormancy, String Noise Sounds re-emerged in its original formation. A dream project which began as reinforcement to our violin duo with a percussive-based duo, comprised of Jessie Cox on drums and Sam Yulsman on the piano, we navigate even more deeply by inviting like-minded composer/performers to join our long duration improv sets. Together we embark on a sonic journey into the unfamiliar, emerging upon a new space we create together. On this night, we will be graced with the presence of Composer/Vocalist, Bethany Younge.