Meredith Monk & Bang on a Can All-Stars: Memory Game 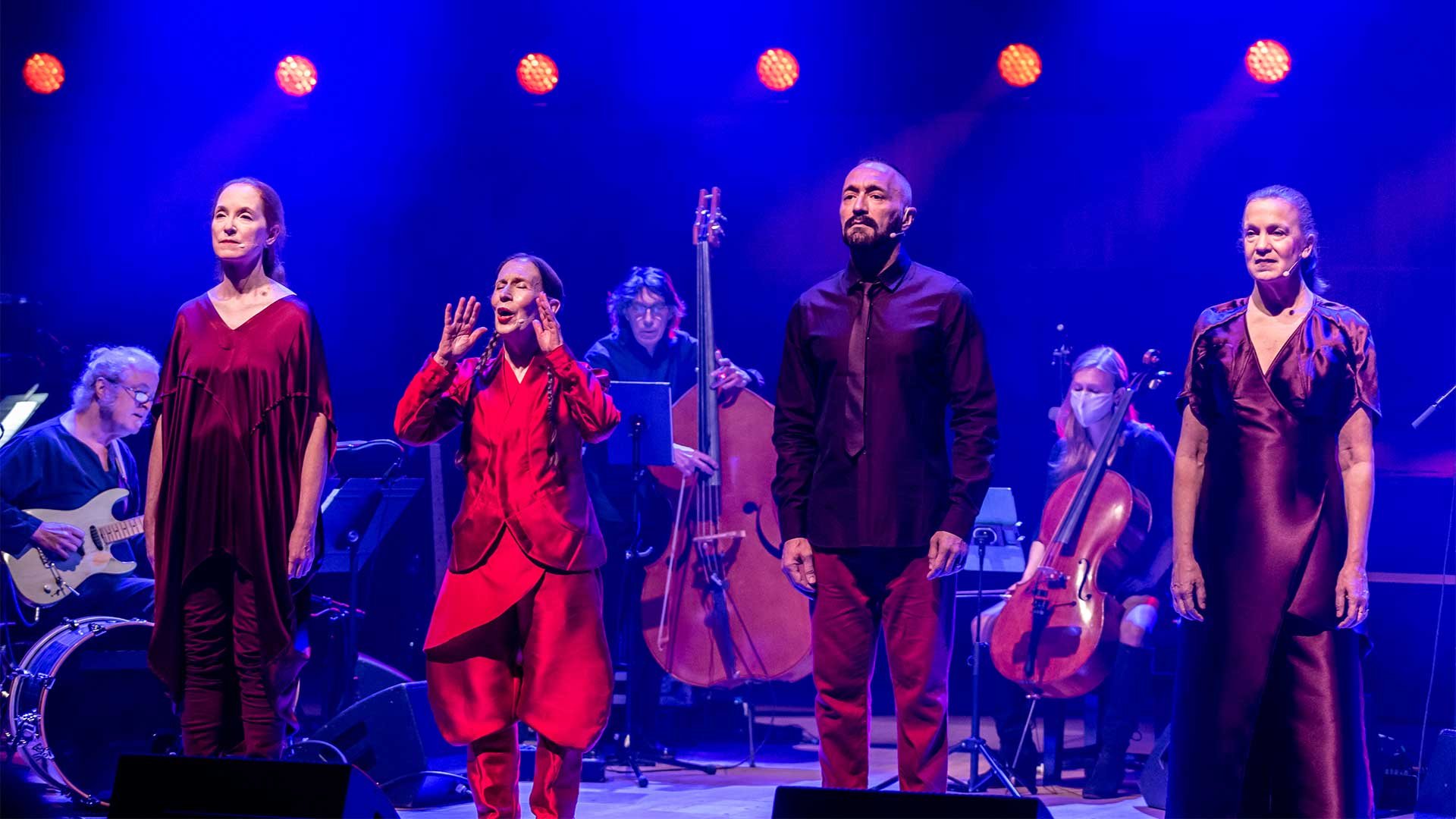 ABOUT MEMORY GAME
MEMORY GAME is both a look back at a pivotal point in Meredith Monk’s storied career, and a richly layered portrait of how vocal music, under the guidance of an indefatigable master, can play with our expectations in poignant and compelling ways. What emerges is a suite of songs that flows with a remarkable narrative cohesion, stemming in large part from the composer’s willingness to revisit the past with an insatiably curious eye.

“The first time that I ever worked with Bang on a Can, it was in the late ‘90s,” Monk tells DownBeat magazine in a recent interview. “That was really, in a way, the beginning of this project. It’s exciting to hear these songs again in a new way, with more of an instrumental aspect added onto the vocal.”

Teaming up here with her renowned Vocal Ensemble (featuring Theo Bleckmann, Katie Geissinger and Allison Sniffin) and the Bang on a Can All-Stars, Monk explores all-new arrangements of never-before-recorded selections from her award-winning sci-fi opera The Games, as well as new versions of several pieces originally released on ECM Records from Do You Be (1987) and impermanence (2008). The album includes arrangements by Monk, Michael Gordon, David Lang, Julia Wolfe, Bang on a Can All-Stars member Ken Thomson, and Vocal Ensemble member Allison Sniffin.

For composer Michael Gordon, whose arrangement of “Spaceship” opens the album, his own memories of Monk’s music go back to his earliest days in New York City. “I saw Meredith perform when I came to New York in the 1970s,” he says. “Her first appearance on the Bang on a Can Marathon was in 1989, and we’ve had a close association ever since. In 1999, we arranged some of her music for her to sing with the Bang on a Can All-Stars. It was magic, and sparks flew! MEMORY GAME is a collection of pieces we’ve performed together in New York and on tour, with some new arrangements that we’ve yet to play live.”

As Monk writes in her liner notes for the recording: “Right from the beginning of conceiving MEMORY GAME, the prospect of uniting the magnificent singers and players from Meredith Monk & Vocal Ensemble and Bang on a Can All-Stars filled me with excitement. My hope is that our rich and joyous experience of making music together inspires and resonates with the listener.”

Meredith Monk (composition, voice) is a composer, singer, and creator of new opera, music-theater works, films and installations. Recognized as one of the most unique and influential artists of our time, she is a pioneer in what is now called “extended vocal technique” and “interdisciplinary performance”. Her groundbreaking exploration of the voice as an instrument, as an eloquent language in and of itself, expands the boundaries of musical composition, creating landscapes of sound that unearth feelings, energies, and memories for which there are no words. Over the last six decades, Ms. Monk has been hailed as one of NPR’s 50 Great Voices and “one of America’s coolest composers”. She is the recipient of numerous honors including a MacArthur Fellowship and an Officer of the Order of Arts and Letters by the Republic of France. Celebrated internationally, her work has been presented at major venues throughout the world. Monk has made more than a dozen recordings, most of which are on the ECM New Series label, including the 2008 GRAMMY® nominated impermanence. Selected scores are available through Boosey & Hawkes. Monk is also the subject of two books of interviews, Conversations with Meredith Monk (now in a new expanded edition), by arts critic and Performing Arts Journal editor Bonnie Marranca, and Une voix mystique, by French author Jean-Louis Tallon, released in a new edition in January. In conjunction with her 50th Season of creating and performing, Monk was appointed the 2014-15 Richard and Barbara Debs Composer’s Chair at Carnegie Hall. Recently she received three of the highest honors bestowed on a living artist in the United States: induction into the American Academy of Arts and Letters (2019), the 2017 Dorothy and Lillian Gish Prize and a 2015 National Medal of Arts from President Barack Obama. Monk is currently developing Indra’s Net, the third part of a trilogy of music-theater works exploring our interdependent relationship with nature, following the highly acclaimed On Behalf of Nature (2013) and Cellular Songs (2018).

Meredith Monk & Vocal Ensemble consists of some of the finest and most adventurous singer/ instrumentalist/performers active in new music. Founded in 1978 to further expand Monk’s groundbreaking exploration of the human voice, the Vocal Ensemble has received multiple awards and critical acclaim, including a 2008 GRAMMY nomination for impermanence. Appearing in festivals, theaters and concert halls around the world, Meredith Monk & Vocal Ensemble can also be heard on numerous recordings on the ECM New Music Series label.

Bang on a Can All-Stars

Formed in 1992, the Bang on a Can All-Stars are recognized worldwide for their ultra-dynamic live performances and recordings of today’s most innovative music. Freely crossing the boundaries between classical, jazz, rock, world and experimental music, this six-member amplified ensemble has consistently forged a category-defying identity. With a massive repertoire of works written specifically for the group’s distinctive instrumentation and style of performance, the All-Stars have become a genre in their own right. Performing each year throughout the U.S. and internationally, the group’s celebrated projects include their landmark recording of Brian Eno’s ambient classic Music for Airports, as well as live performances with Philip Glass, Don Byron, Iva Bittova, Thurston Moore, and others. Current and recent project highlights include “In C,” a new dance collaboration with Sasha Waltz & Guests based on Terry Riley’s minimalist classic; Dance Party, a brand new multimedia concert pairing composers and choreographers; MEMORY GAME, a new record release and touring program featuring legendary composer-singer Meredith Monk; Julia Wolfe’s Flower Power for Bang on a Can All-Stars and orchestra, a multimedia concert exploring the sonic landscape of the late 1960s; Road Trip, an immersive concert collaboratively composed by Michael Gordon, David Lang and Julia Wolfe to commemorate the 30+ year journey of Bang on a Can; performances and a recording of Julia Wolfe’s Pulitzer Prize winning Anthracite Fields for the All-Stars and guest choir; Field Recordings, a major multi-media project featuring over 30 commissioned works by pioneering musicians from across all genres and borders; Cloud River Mountain, a collaboration featuring Chinese superstar singer Gong Linna; and more. The All-Stars record on Cantaloupe Music and have released past recordings on Sony, Universal and Nonesuch.

Meredith Monk & Bang on a Can All-Stars: Memory Game