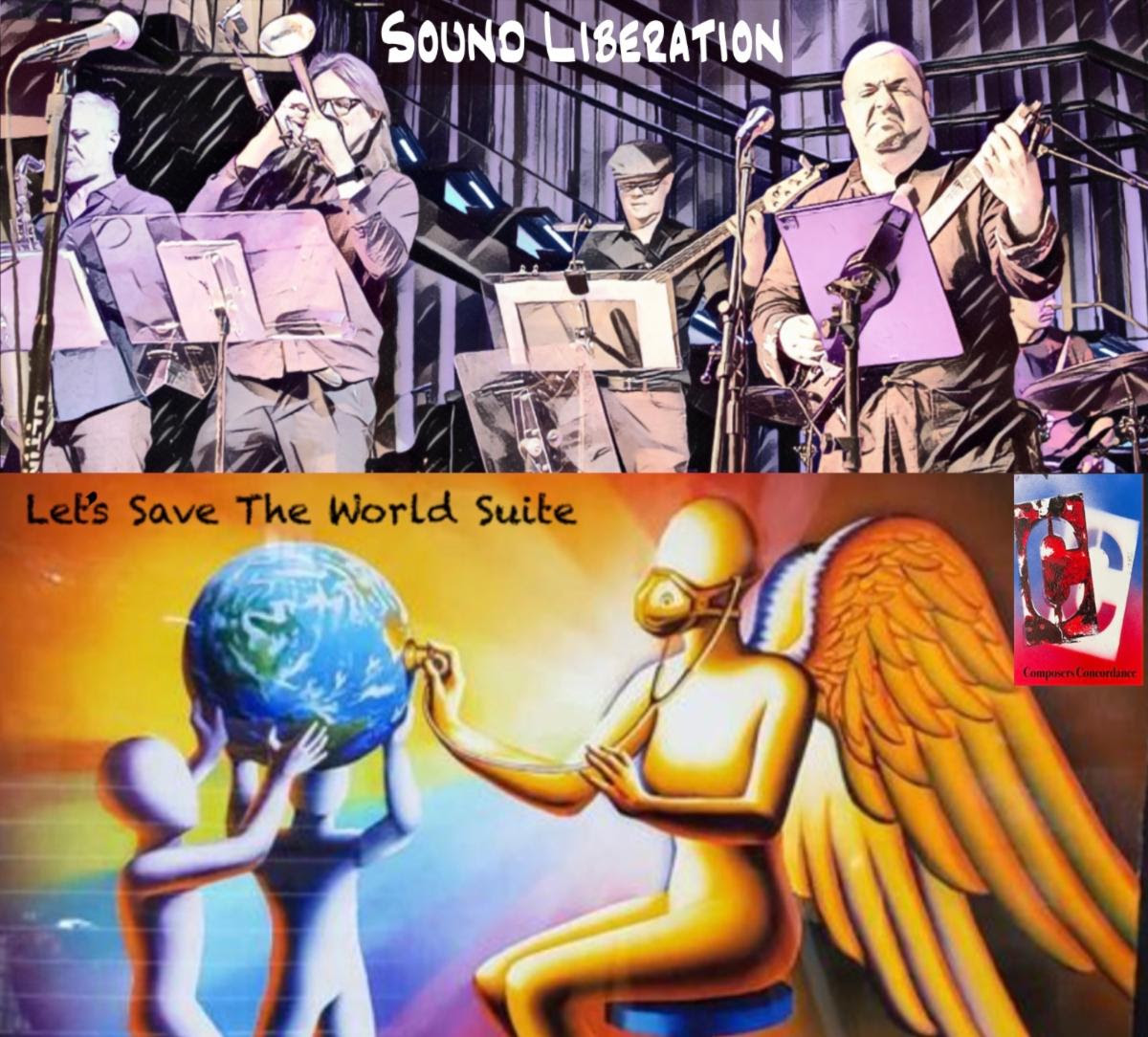 Composers Concordance and Composers Concordance Records present the album release of Gene Pritsker’s ‘Let’s Save the World Suite’. The seven-movement composition, based on three poems of Erik T. Johnson, is scored for a quintet of trumpet, saxophone, electric guitar, electric bass and drum set, with poet Erik T. Johnson reciting the poems in three of the movements. The music and poetry deal with our feelings toward the world in the past few years during the time of the pandemic, though not directly mentioning it. The music is inspired by jazz, music of various cultures, contemporary classical techniques and has an overall unique sound. Combining sonic elements that have very different personalities.

​“Sound Liberation display a level of multi-instrumental virtuosity and imagination that makes middleweight prog acts seem positively pedestrian by comparison. It’s not everyone’s cup of tea for sure but for the open-minded muso, there’s weeks and weeks of musical nourishment to feast upon in these thirteen tracks.“
– Jodi Mullen, This is Not A Scene

“Unexpected twists and turns…The result my have you seeing visions…strains of jazz, contemporary classical music, minimalism, and even hip-hop and African rhythms”
– John Ephland, Downbeat

“When a composer gets into R&B/Rock/Pop you expect something interesting. And with Gene Pritsker’s
Sound Liberation you get it.”…”It’s not just that things are combined that don’t ordinarily come together, it is that they do so with a musical result that grabs you and does not let go” –
– Gapplegate Guitar & Bass Blog

Gene Pritsker Bio:
Composer Gene Pritsker has written over eight hundred compositions, including chamber operas, orchestral and chamber works, electro-acoustic music and songs for hip-hop and rock ensembles. His compositions employ an eclectic spectrum of styles, that are influenced by his studies of various musical cultures.
He is the founder and leader of Sound Liberation, an eclectic hip hop-chamber-jazz-rock-etc. ensemble. He also Co-Directs Composers Concordance. Gene’s music is performed all over the world at internationally recognized festivals and by highly-respected ensembles and performers.
He co-founded the Grammy-nominated Absolute Ensemble with Kristjan Järvi and has been a composer in residence and guitarist since its creation in 1993. He worked closely with jazz-fusion legend Joe Zawinul, and has orchestrated major Hollywood movies, including ‘Cloud Atlas’, for which he wrote additional music and composed his ”Cloud Atlas Symphony’ – released in 2022. He is also the lead orchestrator for such TV series as Babylon Berlin, Jett, Netflix’s Sense8 and Messiah. Gene is the lead orchestrator and has additional music in the 2021 film The Matrix Resurrections.
“My music is extremely eclectic, for me music has no bounds – I view the world of music as one big genre. My motto for my art is ending the segregation of sound vibration.”
Gene is also a guitarist/rapper/Di.J./ and producer, he incorporates each of these musical attributes to create music that is “not designed for easy listening or to melt into the background. It is insistent. It demands attention and curiosity.” – New York Newsday.

About Composers Concordance
Staying in rotation for 39 years in NYC is a rare feat. In the case of a new music presenting organization, it requires not only diligence and cognizance of achievements of the past but also an ethic of keeping one’s ear to the ground for emerging stylistic and technological
developments, as well as talented new composers on the scene. Composers Concordance, founded in 1984 by Joseph Pehrson and Patrick Hardish, advised by Otto Luening, strives to present contemporary music in innovative ways, with an emphasis on thematic programming. Directors Gene Pritsker and Dan Cooper co-curate the programs and lead the CompCord Ensemble, Chamber Orchestra, String Orchestra, and Big Band. Associate Directors are Milica Paranosic, Peter Jarvis, Debra Kaye, and Seth Boustead. Composers Concordance has also created a Naxos-distributed record label: Composers Concordance Records, co-directed by Peter Jarvis. Composers Concordance’s overriding vision is to promote contemporary music, composers, and new works as a rightful and respected part of society. Good music performed and recorded well, pushing the boundaries of sound and composition.

“An unwavering force in giving composers exposure through concert bookings and its own record label, the intrepid new-music organization Composers Concordance” – The Brooklyn Rail

“The Composers Concordance folks are unpredictable and at times refreshingly irreverent in a reverent sort of way….ingenious fun” – Classical-Modern Music Review