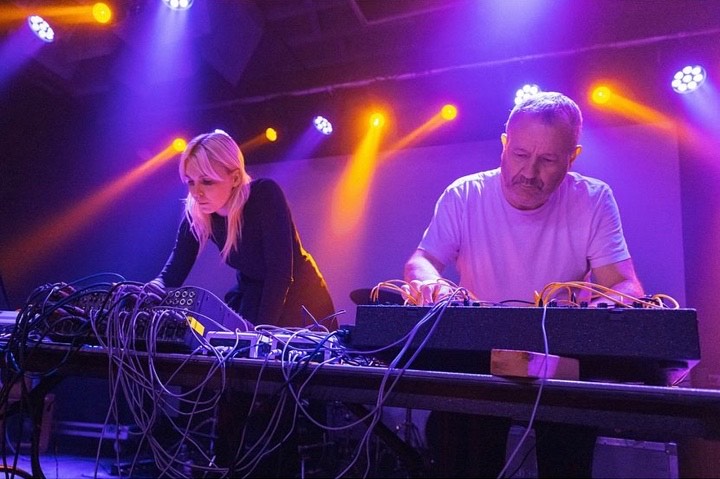 ISSUE is commissioning artists to produce collaborative work at a time when the ongoing COVID-19 pandemic has drastically impacted their ability to travel and perform, and altered the nature of collective work and performance. Pairing artists in disparate locations who cannot work together in “traditional” ways, the Distant Pairs series examines the collaborative process, methods of working, and partnership amidst these constrained conditions.

Puce Mary is the solo moniker of experimental musician and sound artist, Frederikke Hoffmeier. Oft-identified with the now-generation of industrial noise—Puce Mary has a reputation for intense live performances that span from gripping renditions of cinematic compositions to the full-on fury of off-the-cuff harsh noise. With countless releases, performances and collaborations with artists such as Kali Malone, Drew McDowall and Loke Rahbek, Puce Mary has reached wide acclaim for her powerful and unique blend of modern industrial/noise music. Born in 1989 in Denmark, Hoffmeier started her career in Copenhagen’s underground music scene, closely affiliated with Posh Isolation and the venue/music collective Mayhem KBH. With her most recent and critically acclaimed album “The Drought” released on PAN, Hoffmeier expands the field of sound more broadly than before, unfurling a complex sonic and literary narrative of tension and release. Amidst disquieting dynamics and surreal cinematics, she voices existential soliloquies, while swarms of sound lurk and blasts interrupt. The Drought is for the ages to be sure—“I find myself feeling like decades have passed” she intones on Red Desert—but it is also unmistakably contemporary, giving new urgency to the fabrics she digs—be it the dense textures of Bianchi or litterature of Baudelaire.

Drew McDowall’s works are sacraments to alterity. An artist who has refused to conform in music and in life, McDowall mines the hallucinatory spaces that exist between reality and celestial otherness. His meditative compositions are haunting and spiritual, melding intricate modular soundscapes with cut-up samples, and deconstructing sounds into their most basic shuddering structures and shapes. The disorienting ambient mirages that result elicit terror, tender melancholy, and heavenly flickers of expansive beauty. Growing up in the gangs of 1970’s Scotland, McDowall—fatigued by years of daily violence and the chaotic madness of that life—sought aggressive self-expression in punk and found a home in Glasgow’s rich underground music community eventually joining the ranks of what would come to define the industrial music’s blossoming experimental vanguard. McDowall eventually collaborated with Psychic TV and became a full-time member of the cult outfit Coil, where his influence shaped the group’s later output: exercises in magical practice and music-as-psychoactive effect.

While McDowall has adhered to electronics throughout his career, he has escaped making music confined to any one genre. This is partially because of his diverse collaborations; since moving to Brooklyn 20 years ago, he has worked with numerous international artists and toured a live AV reinterpretation of Coil’s seminal drone work, Time Machines, at festivals across the world. His performances and showcases led to his first studio album on Dais Records in 2015, Collapse, which was quickly followed by Unnatural Channel, The Third Helix and most recently, Agalma—his most expansive and imaginative work yet. Its seven tracks include contributions from Caterina Barbieri, Robert Aiki Aubrey Lowe, Kali Malone, Maralie Armstrong-Rial, Bashar Suleiman, Elvin Brandhi and MSYLMA. Together, they create a keeling sound synonymous with McDowall’s traditional production method, but integrate aria, pipe organ, and choral mass to strike a fresh-and nearly devotional-chord.

During the Winter, 2022 ISSUE is continuing to commission artists as part of the Distant Pairs series, producing collaborative work at a time when the ongoing COVID-19 pandemic has drastically impacted their ability to travel and perform, and altered the nature of collective work and performance. Pairing artists in disparate locations who cannot work together in “traditional” ways, the Distant Pairs series examines the collaborative process, methods of working, and partnership amidst these constrained conditions.