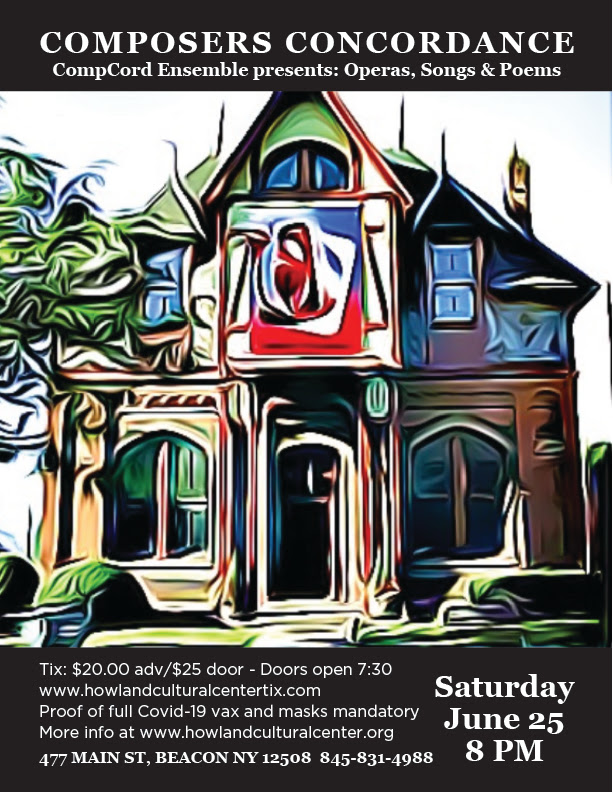 For Immediate Release – New York, NY – On June 25th at 8pm ET, contemporary vocal music and poetry recitations intertwine on Composers Concordance’s concert event entitled ‘Operas, Songs, & Poems.’ This 3rd annual collaboration between NYC and Beacon artists will be held at the Howland Cultural Center, which was the first building in the City of Beacon to receive the distinction of being placed on the National Register of Historic Places. David Amram’s ‘Pull my Daisy Reimagined,’ Faye-Ellen Silverman’s ‘Channeling Twain: Advice for Our Time,’ Debra Kaye’s ‘Snow’, and Gene Pritsker’s ‘The Meeting’, a mini-opera on a story by Roger Aplon, will be featured.

The concert will also be live-streamed on the Composers Concordance Facebook Page.

Staying in rotation for 38 years in NYC is a rare feat. In the case of a new music presenting organization, it requires not only diligence and cognizance of achievements of the past but also an ethic of keeping one’s ear to the ground for emerging stylistic and technological developments, as well as talented new composers on the scene. Composers Concordance, founded in 1984 by Joseph Pehrson and Patrick Hardish, advised by Otto Luening, strives to present contemporary music in innovative ways, with an emphasis on thematic programming. Directors Gene Pritsker and Dan Cooper co-curate the programs and lead the CompCord Ensemble, Chamber Orchestra, String Orchestra, and Big Band. Associate Directors are Milica Paranosic, Peter Jarvis, Debra Kaye, and Seth Boustead. Composers Concordance has also created a Naxos-distributed record label: Composers Concordance Records, co-directed by Peter Jarvis. Composers Concordance’s overriding vision is to promote contemporary music, composers, and new works as a rightful and respected part of society. Good music performed and recorded well, pushing the boundaries of sound and composition.

“The Composers Concordance folks are unpredictable and at times refreshingly irreverent in a reverent sort of way….ingenious fun” – Classical-Modern Music Review

“An unwavering force in giving composers exposure through concert bookings and its own record label, the intrepid new-music organization Composers Concordance” – The Brooklyn Rail