City of Industry: The Music of Annie Gosfield 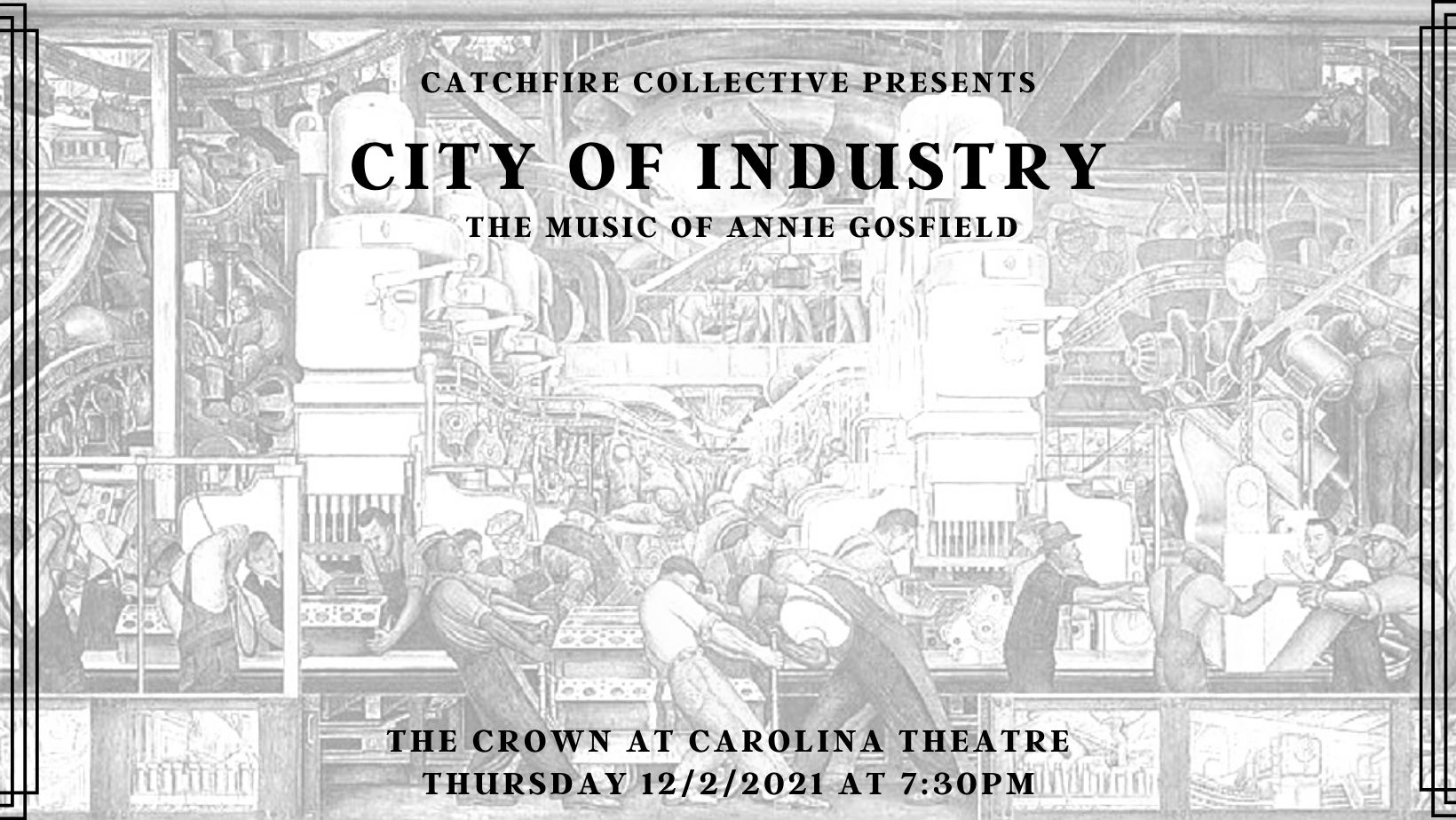 Join Catchfire Collective for “City of Industry,” featuring the music of American composer Annie Gosfield on Thursday, December 2, 2021, at 7:30 PM, at the Crown at the Carolina Theatre!

Described as “a one woman Hadron collider” by the BBC, Annie Gosfield works on the boundaries between notated and improvised music, electronic and acoustic sounds, refined timbres and noise. She composes for others and performs with her own group, taking her music on a path through festivals, factories, clubs, art spaces, and concert halls. Her music is often inspired by the inherent beauty of found sounds, such as machines, destroyed pianos, warped 78 rpm records and jammed radio signals.

“City of Industry” explores the fusion of industry, found sound, and music in Gosfield’s work. Presented by Catchfire Collective, the concert features Gosfield’s “Cranks and Cactus Needles,” a work inspired by the sounds of deteriorating 78 RPM records. Catchfire’s cellist Peter Swanson will perform as soloist during Gosfield’s “Almost Truths and Open Deceptions.” The second half of the concert opens with “Voices Over the Buzz and Clatter,” described by Gosfield as a conversation between industrial sounds and women’s protests throughout history. The concert concludes with Gosfield’s stunning “Detroit Industry: The Goddess Stamps Metal While the Blast Furnace Sings,” inspired by Diego Rivera’s iconic “Detroit Industry” murals.

Please note that the Carolina Theatre requires all attendees to provide proof of full vaccination or negative viral test within 72 hours prior to attending or participating in an event at the theatre for everyone age 12 and above. Proof will be required before entry to the theatre and will be accepted in the form of an original vaccination card, a photocopy or digital image of the card, or a printout of negative test results, along with a photo ID.

“City of Industry” is presented by Catchfire Collective with special guests Annie Jeng, piano; Heather Lambert and Sierra Sims-Smith, violin; and Dave Phillips, viola. Based in Greensboro, North Carolina, Catchfire Collective presents innovative, powerful, and inspiring performances that reignite the chamber music experience. Their programming has been met with audience and critical acclaim, praised as “magical” and featuring “relentless pulse, contrasting textures, and beautiful individual playing.” During Spring 2022, Catchfire will be in residence at the Hyers Theatre in Greensboro to produce choreography for Eleanor Alberga’s “Dancing with the Shadow.” In 2019, Catchfire was the featured ensemble at the 2nd Annual Darkwater Women in Music Festival. Catchfire has also been featured as a guest artist at Virginia Tech, Towson University, and Grand Valley State University.

PROGRAM: All works by Annie Gosfield.